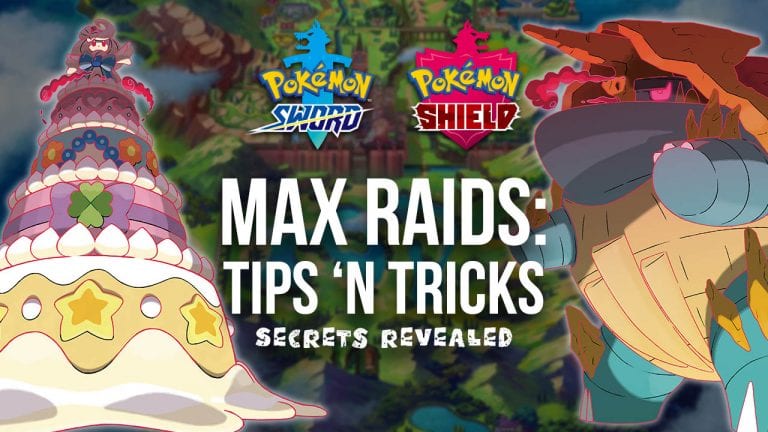 Can’t stop playing the new multiplayer Max Raids in Pokémon Sword & Shield? Looking to know the details? Here are some helpful tips and tricks to help you capitalize on your Max Raids!

Pokémon Sword & Shield introduce cooperative Max Raids!
These Raid battles can be fought with friends locally, like when you and your Pokémon GO friends gather around a local landmark for a raid, or over the Internet with a Nintendo Online account. To ensure only your friends play with you, add a 4-digit room code by pressing +. Only players who enter the correct code will be able to join you! Non-player characters (NPCs) will fill any of the 4 spots that are empty when the host starts the battle. If you find a rare Max Raid, tell your friends on Discord your room code!
You can leave a raid and re-enter it to restart the 3 minute timer without losing the Max Raid Pokémon–including Gigantamax. So give your friends as much time as they need!

Different locations in the Wild Area will feature different Pokémon. Although this data has not been finalized, you are more likely to encounter the same kinds of Pokémon in specific dens. This informs hunting Gigantamax and hidden ability Pokémon. Also, some dens appear to only feature event Pokémon the Lost Watchtower West of Motostoke only lights up after the use of a Dynamax Crystal.
More data on this as it is uncovered!

Look to the Star Values

Max Raids have star values. Simply put, these refer to difficulty by Pokémon levels. You will only be able to find dens consistent with the number of badges you have. Want to win? Consider bringing Pokémon in these approximate ranges to Max Raids by star value:

The Pokémon caught from these raids will be similar in level. So bringing a higher level Pokémon will certainly make the Raid easier. Note these data rangers are based on field research and are subject to change.

In addition to influencing levels, star value also informs drops, individual values (IVs), and number of shields the Max Pokémon will likely use.

Max raids have 100% drop rates for technical records (TRs). If you’re looking to buff up a team member, consider searching for Max raids! The Pokémon drop TRs consistent with their primary typing. In other words, a Boldore raid will give Rock Type TRs (likely Stealth Rock).

The higher the star level, the stronger the TRs you will receive. In addition, you’ll be receiving Dynamax Candies, Exp Candies of various sizes, berries, Rare Candy, Treasures, and even bottle caps! The greater the risk, the greater the reward! Some of these values are estimates and will be updated as details are fully known.

If you commit yourself to consistent Max Raids, you’ll find yourself swimming in Nuggets, Star Pieces, Comet Shards, Balm Mushrooms, and Exp Candies! Consider evolving non-party Pokémon with Exp. Candies to fill the Dex, or give yourself an edge against in the Gym Challenge!

Although you won’t be able to track them until the post game, individual values are virtually invisible bonus base statistics (stats). Each Pokémon has six stats: HP, Attack, Defense, Special Attack, Special Defense, and Speed. Each of these stats has a value between 0-31. Theoretically, a Pokémon with 31 IVs in HP will have an HP stat that is 31 points higher than a Pokémon whose HP IV is 0. In other words, the more IVs, the stronger the Pokémon! In Max Raids, IVs correspond to the star value:

IVs are valuable in battles with that Pokémon, and also can be passed down from parent Pokémon when breeding! Collect Max Raid Pokémon from all egg groups in order to build a competitive breeding pool!

When encountering a Pokémon in a Max Raid, you will have a chance to capture that Pokémon with its hidden ability (HA). A HA is one that cannot be encountered by regular means. In other words, a single overworld encounter with a Sneasel will not give you its HA Pickpocket, but a single Sneasel encountered in a Max Raid could have this ability! Look into which HAs match your Pokémon’s build and start searching! These abilities are often superior to their regular abilities and can be passed down from parent Pokémon to the same species Pokémon.

There are several different components that can look different when entering a Max Raid. For one, the Over World appearance may look different. Here’s what these changes imply:

Too Soon To Tell

Shiny Chances may be increased for Max Raids. In the week since its release, many trainers have reported encountering shiny Pokémon in Pokémon Sword & Shield via Max Raids. As more information is uncovered, this will be updated.

Want some powerful allies to take on Max Raids? Notice any trends as to which Pokémon appear in which dens?
Help contribute to our Galar field research! Join us on Discord!