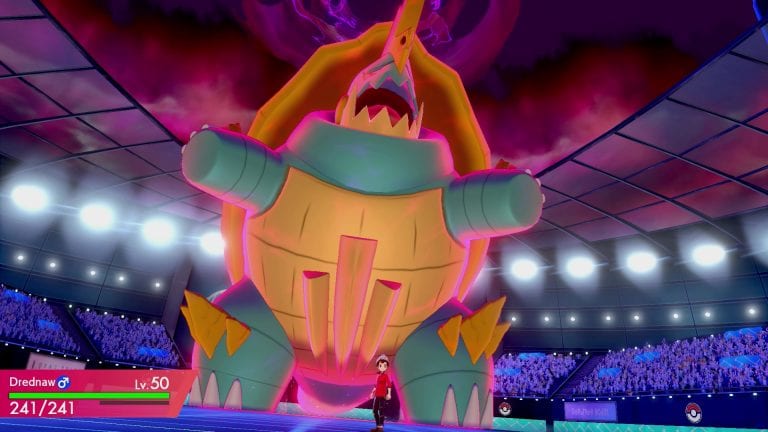 What are Gigantamax Pokémon?

Gigantamax Pokémon are a new phenomenon found in Pokémon Sword & Shield. They have undergone the Gigantamaxing process during battle and are now bigger and more powerful.

What is different between Dynamaxing & Gigantamaxing?

What makes Gigantamaxing different from Dynamaxing is that the Pokémon take on a new appearance and are able to access powerful G-Max Moves. Those are attacks that can be only used by specific species of Pokémon after Gigantamaxing.

Even if a Pokémon has a Gigantamax form, not all individuals of that species may Gigantamax. What determines their ability to Gigantamax has not been revealed yet.

Gigantmax Alcremie takes on a new appearance which looks like a giant cake. It gains access to the G-Max Move “G-Max Finale” which heals all teammates while damaging opponents.

Official description: The cream pouring out of its body hardens when subjected to impacts—the stronger the impact, the harder it becomes. This gives Alcremie a truly impressive resistance to physical attacks. Additionally, the giant “Berry” decorations on Alcremie’s body are as hard as diamonds, and it’s said that most attacks won’t even be able to leave a scratch.

Alcremie will launch high-calorie cream missiles around itself to attack its opponents. Any Pokémon that touches this cream will be filled with energy and euphoria but at the same time will fall into a state of complete confusion.

Gigantamax Corviknight gains reinforced armor and is flanked by independently flying ‘blade birds’. It is able to use the G-Max Move “G-Max Wind Rage” which not only damages the opponent, but also removes different field effects.

Official description: Corviknight uses its massive wings to catch updrafts created by Gigantamax energy to hover in the air while it battles. The armor on its body has been reinforced, so attacks from Pokémon on the ground barely have any effect on it!

Gigantamax energy has caused the armor covering Corviknight’s wings to separate and become blade birds, capable of flying independently. Corviknight launches these blade birds at the target, using them to slash its opponents.

Gigantamax Drednaw becomes bipedal after Gigantamaxing and is more heavily armored than its normal form. It can use the G-Max Move “G-Max Stonesurge” which both damages opponents and scatters sharp stones across the opponent’s side of the field.

Official description: The power of Gigantamaxing has allowed it to stand on its hind legs and become bipedal! From its standing position, it can come crashing down on opposing Pokémon and crush them with its massive body!

Drednaw normally keeps its neck retracted within its shell, but when it attacks, it can rapidly shoot its neck out. Its jaws are also incredibly strong, capable of easily biting through huge metal towers. The strength of its jaws combined with the force of its neck gives Drednaw the power to punch a hole through a rocky mountain in a single strike.

Gigantamax Charizard has fire erupting out of different parts of his body and has large fiery wings. This definitely isn’t the Charizard from your childhood. It is able to use the G-Max Move “G-Max Wildfire” which will set up a fire spin while dealing massive damage to an opponent.

Official description: The flames inside its body have become stronger, and now fire erupts from its mouth and horns in addition to its tail. It seems that the strength of the flames increases when Charizard roars.

Charizard’s flames have become enhanced with Gigantamax power and now form wings on its back. These wings are hotter than magma, and Charizard can fire them off to scorch its opponents!

Retro fat Pikachu is back and he is cuter than you remember him! Featuring a look based off his generation 1 sprite, Pikachu is noticeable bulkier and sports a longer tail. It can use the G-Max move “G-Max Volt Crash” which not only does damage but paralyzes the foe!

Official Description: It’s become so powerful that now it can produce enough electricity to rival a power plant! However, using this electricity to help power people’s homes seems difficult, as Pikachu can only remain Gigantamaxed for a short time.

All the electricity it generates in the sacs in its cheeks is stored in its tail. In battle, it will strike opponents with its tail and send a jolt of electricity through them as great as any lightning strike!

Eevee’s gigantamax form is based of her generation 1 sprite, so she sports her large luscious fur again. It can use the G-Max move “G-Max Cuddle” which not only does damage but leaves the opponent infatuated if it is of the opposite gender.

Official description: Gigantamaxing has caused Eevee to become more rambunctious than ever, and it will attempt to play with any opponent. However, it often ends up crushing its opponent due to its massive size.

The fur around its neck has become extra fluffy and luxurious thanks to Gigantamax power. Any opponent caught in this fur becomes enamored with Eevee and loses the will to fight.

What do you get when you combine internet memes and Pokemon? Gigantamax Meowth! Meowth’s body is now stretched out and his head sports a larger coin. Meowth uses the G-Max move “G-Max Gold Rush” which deals damage to your opponent and scatters coins across the battlefield that you may collect afterwards.

Official Description: Meowth loves shiny objects, and when it sees skyscrapers lined with glass, it won’t be able to resist the urge to sharpen its claws on them. This behavior can cause considerable damage, such as wearing down the exterior walls and breaking windows.

Gigantamaxing has caused Meowth’s body to stretch to astounding lengths, and the coin on its head has also become massive. The giant coin can emit a torrent of Gigantamax power, filling the surrounding area with a powerful golden gleam.

After being sidelined for a mega in favor of Beedrill in generation six, Butterfree is back with a new gigantamax form. Butterfree now has much larger wings and a greenish glow. Butterfree can do the G-Max move “G-Max Befuddle” which deals damage and scatters scales onto the battle field that can poison, paralyze, or make the foe fall asleep.

Official description: Butterfree’s vast wings can stir up a wind strong enough to lift a 10-ton truck, just by flapping. This wind also scatters poisonous scales around the area, so simply being near this Pokémon is very dangerous.

Its most notable feature is its blinding wings, which have grown to gigantic proportions. The light of its wings comes from their scales, which can inflict paralysis, poisoning, or sleep on its opponents. These scales are Butterfree’s most effective weapons!

Keep in mind that G-Max Moves are Pokémon specific, but will take the place of any move of the same type.