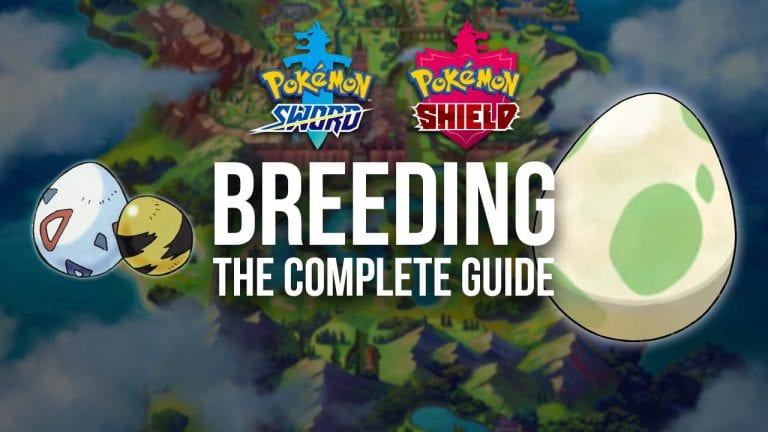 Since Gold & Silver, Pokémon players have been able to breed their Pokémon in order to get an egg. In fact, some baby Pokémon are only available in-game when hatched from an egg. Once they have received an egg, players must then walk a certain number of steps in order to hatch the Pokémon!

You can breed your Pokémon at the Pokémon Nursery! For the first time in series history, you can put Pokémon from your box into the Nursery!

A majority of the time, Pokémon are assigned a sex which is commonly referred to as “gender.” We’ll be using the terms “male” and “female” to refer to a Pokémon’s assigned sex for the entirety of this page.

Male and female Pokémon influence your desired egg differently! Although most ways will be explained by category, here’s are two of the basics:

All Pokémon have 1 or 2 egg groups. Serebii has created a wonderful database of Pokémon available in Sword & Shield organized by egg group! A male and a female Pokémon that share an egg group can breed! Pokémon in the Undiscovered egg group (e.g., legendaries) cannot breed. Egg groups are important when considering passing down natures, egg moves, and individual values.

The Transform Pokémon Ditto is able to match any Pokémon with an egg group and create an egg! This allows for flexibility in breeding for male and female Pokémon, as well as, providing the only way to breed “genderless” Pokémon like Polteageist! We have an entire guide on how you can catch the perfect Pokémon breeder’s companion Ditto!

Pokémon are able to learn select moves from different species Pokémon in their egg groups! These Egg Moves can give your Pokémon a more competitive move pool, and can require careful planning!

Now in Galar, non-bred Pokémon can learn egg moves from the same Pokémon when put in the Day Care together! For example, your starter Grookey can learn Leech Seed if you put it in the Day Care with a Grookey who knows the egg move! The one stipulation is you must have an empty move slot on the desired parent Pokémon. In the example above, your starter Grookey would need to first go to the Move Deleter in the Pokémon Center. That’s all!

Almost every Pokémon specializes in one stat at the expense of another. Natures determine which stat gets a 10% boost, which is reduced by 10%, or if all remain the same. For the purposes of competitive Pokémon, it’s important to consider nature.

*These natures and “neutral” and you will see no stat changes.

The Everstone is a hold item that allows players to control what nature will be passed on to the egg Pokémon. The Pokémon holding the everstone has a 100% chance to pass on their nature. So, if you need a Modest Sobble, breed a female Sobble with your Modest male Wooper holding an Everstone!

When breeding, the parent Pokémons abilities are more likely to be passed down to its egg!
Before breeding, determine which ability you want your Pokémon to have. This will inform when you hatch your perfect Pokémon. If a Pokémon is bred without its Hidden Ability, it can never gain that ability. Use the chart below when determining the likelihood your egg will have a hidden ability.

The invisible system of Individual Values (IVs) has been behind the scenes for a long time. Unlike Effort Values (EVs) you are unable to influence these Pokémon in regular gameplay–with one exception. These stats represent your Pokémon’s “genetics”. They’re the unique numbers that make your Pokémon’s stat growth unique. They range from 0-31.

In Sword & Shield, you’ll be able to assess IVs through the judge function after completing the main story. You will also need to reach Tier 4 in the Battle Tower in Wyndon. To access the “judge” function, press “+” in your Pokémon Box. You will see a list of qualitative descriptions beside each stat.

If you breed competitive Pokémon, there are only two descriptors you might aim for “Best” (31) or “No good” (0). Middle of the road IVs (Fantastic, Decent, etc) are not your objective in competitive breeding, and won’t be covered here.

To influence which IVs your Pokémon pass down you can use the Destiny Knot and/or Power Items! Each time a Pokémon breeds, 3 IVs are selected from the parent Pokémon. But with these items, you have more control! The Power Items can be purchased at the BP Shop in Hammerlocke City, whereas, you’ll be able to buy the Destiny Knot in the Wyndon Battle Tower.

When breeding with or without items, remember: there are two parent Pokémon and a total of 12 inheritable IVs. Use the chart below to better plan IV breeding:

If you are hoping to get a perfect 5IV or 6IV Pokémon, you should swap out parent Pokémon for the higher IV hatched Pokémon. For example, when you hatch that female Grookey with 4IVs, swap it out for its 3IV mother. This will increase your odds of hatching a higher IV Pokémon! The more perfect IVs available in the parents, the more likely you’ll get the IVs for which you’re hoping!

When breeding in Galar, an egg Pokémon will inherit the Pokéball from its parents. The Pokéball passed down depends on the parent Pokémon. That being said, the Master Ball and Cherish Ball are never passed down and are replaced with the standard Pokéball.

The Shiny Charm is the reward for completing the PokéDex! It’s also a great way to increase your chances of hatching a shiny Pokémon. It grants the player a x3 multiplier for all Pokémon encounters–eggs or wild battles!

Masuda Method is a breeding technique in which players use two Pokémon from different language games (e.g., English and German, Japanese and Chinese, etc.). The effects of this is a x6 multiplier to the chances of shininess!

Eggs hatch by number of steps. Although different Pokémon species hatch after different amounts of steps, you can speed up hatching all eggs by riding your bike. Also, Pokémon abilities Magma Armor, Steam Engine, and Flame Body will “incubate” your eggs and cut your hatching time in half! Make sure you bring a Carkoal or Hidden Ability Sizzlipede in the front of your party while you hatch eggs!